Crossed by eight major interstates, Ohio has the 7th largest road system and the 6th largest interstate system in the United States.  Wilmington Air Park is less than 10 miles east of Interstate 71 which serves as a major north-south link between the Great Lakes and the Southeast.  The recently completed 73 Bypass gives trucks easy access to the Interstate highway system. Ohio’s trucking industry is the 4th largest in the nation adding over $6.3 billion to the gross domestic product.

Ohio’s rail industry ranks 4th in the nation as measured by contribution to the gross domestic product--$1.8 billion—and, its 5,318 miles of tracks than are more than those of 47 states.  Its 5,316 miles of tracks are more than those of 47 other states. CSX Transportation, Norfolk Southern and Wheeling and Lake Erie all run rail operations throughout Ohio.  Rail spurs connecting truck, air and water traffic maximize the benefit this system provides the region and state.

In addition to the Air Park being a fully functional industrial airport, Wilmington Air Park is located within a 60-mile radius of the Dayton, Cincinnati and Columbus International Airports. Wilmington Air Park provides seamless air-to-highway connectivity. In addition, Ohio's 180-public airport system provides a sure air transport solution to every region in the state.

Ohio has 209 port terminals along 716 miles of navigable waterways leading to the Gulf of Mexico and the St. Lawrence Seaway.  The Army Corps of Engineers ranks Ohio 7th in waterborne domestic cargo. 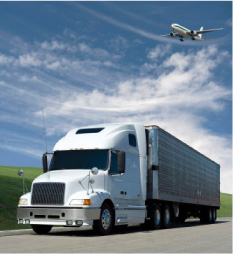