The Wilmington Air Park is rich in history. In 1929, a group of local aeroplane enthusiasts initiated flying activities on a field in Clinton County, Ohio. A year later the first hangar was built. Throughout the 30’s and 40’s the airport would take on many roles. American Airlines used the airport for flights to Columbus and Cincinnati. Throughout World War II, The Army Air Corps would take control of the field, naming it Clinton County Air Field, and conduct research, training and development.  During the Korean War the base was used as an Air Reserve Center.

In 1960 the base was transferred to the Strategic Air Command which was responsible for maintaining a peacetime force strong enough to discourage enemy aggression.  In 1972, the base was decommissioned by the Air Force and the Wilmington economic development community established the Community Improvement Corporation which took over the base, renaming it the Wilmington Industrial Air Park.

The Park took off in the 70’s with new tenants moving into the Wilmington Industrial Air Park. Early tenants included National Airways, Kurz-Kasch and Midwest Air Charter. The establishment of educational organizations, including Southern State College and the Laurel Oaks branch of the Great Oaks Vocational School, provided a trained workforce for employers.

In 1980, Airborne Freight Corporation acquired Midwest Air Charter and established Airborne Express.  Throughout the 80’s and 90’s Airborne Express would become a dominate player in the air cargo market. The airport would become the only privately owned and operated airport with a CAT II Landing System. Packing and sorting facilities, aircraft maintenance hangars, fire stations, fuel facilities as well as expanded runways and roads would be added to the Air Park to accommodate growth. With various purchases of land from both governmental and private entities the park would increase in size to 2,000 acres.

In 2003, German cargo giant DHL purchased the sales and ground network of Airborne Express.  As a result, the aircraft portion of Airborne Express would become ABX Air and enter into contracts with DHL to continue providing air services.

In May 2008, DHL announced that to stem significant losses in the US Market, it would initiate a new business strategy.  Throughout the next year, DHL exited the domestic package delivery market in the US and moved its international business to the Cincinnati Northern Kentucky International Airport.  Over 8.000 local jobs were lost as a result of DHL's decision to exit the express package delivery business in the US.

In 2010, DHL donated the Air Park to the Clinton County Port Authority for economic redevelopment in the region.  The donation represents one of the largest public donations of private land in the State of Ohio’s history. At that time it was home to four businesses and nearly 750 employees.

Today, the Wilmington Air Park has nearly all leasable space occupied, has 15 companies operating at the airport and is home to approximatly 3,500 employees. The diversified tenant base includes airlines, manufacturing, logistics, cargo operations high-tech/emerging processes and entry level opportunities. A 250-acre development site is available ajacent to the airport.

Long an economic development driver for the region, the Wilmington Air Park continues to attract the attention of businesses and job seekers, alike. 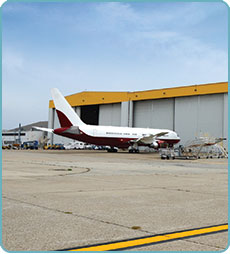