In the Clinton County region, businesses have access to a plentiful, highly skilled workforce. Ohio is the home to world-class public and private universities and research institutions.  There are 194 institutions of higher education in Ohio, more than any other state on a per capital basis and there are 95,000 degrees conferred each year to associates, bachelor, and graduate students. Ohio ranks 4th in integrating technology into its education system, according to the State New Economy Index.

Wilmington College has graduated liberally educated professionals since its founding by local Quakers  in 1870. It hosts 1,100 students at its main campus in Wilmington and another 400 in two Cincinnati degree completion programs at Blue Ash and Cincinnati State Technical and Community College. Most popular main campus majors include education, athletic training, agriculture and business administration/economics. The College competes in 21 sports as a member of NCAA D-III and the Ohio Athletic Conference. WC consistently ranks in the top tier of U.S. News & World Report's Midwestern Regional Liberal Arts Colleges.

Southern State is a two-year community college that serves the diverse needs of its constituents. In addition to offering Associate degrees in both technical as well and transfer programs, the College offers a wide array of adult workforce programs.
Southern Sate is accredited by the Commission on Institution of Higher Education of the North Central Association of Colleges and Schools.

University of Cincinnati is an Ohio public university with an enrollment of 42,000 students and is the second largest university in the University System of Ohio.  The Princeton Review ranks UC as one of the top public universities in the United State.  UC offers 308 fields of study with a 15 to 1 student/faculty ratio. UC garners nearly $550 million per annum in research funding and ranks 22nd among national universities. With an economic impact of over $3.5 billion per year, it is the largest single employer in Cincinnati.

The University is a private catholic university located in the heart of Dayton, Ohio. Student enrollment is approximately 11,000.

The research arm of University of Dayton’s (UDRI) employs over 400 engineers. UDRI has conducted over $1 billion in research. In Ohio, UDRI is the top non-profit institution that receives contracts from the Department of Defense. In 2010, GE Electric the construction of a new $51 million research facility on the University of Dayton campus. The Center will be used for the collaboration between University Researchers and GE to create new electrical power technologies.

Wright State University is a public university with an enrollment of 19,000 students. Located just outside of Dayton, Ohio, it is less than 45 minutes from the Wilmington Air Park. Wright State offers 91 baccalaureate degrees and 76 graduate degrees. 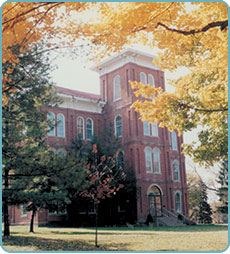